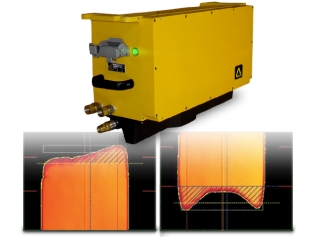 The overall results of the crop optimization system depend on accuracy of the different phase in this process :

DELTA has extensive experiences working with customers to implement strategies, which protect the quality of the product while minimizing the amount of crop loss.

For the detection and tracking of the bar before crop shear, DELTA can offer a complete range of sensors, including: 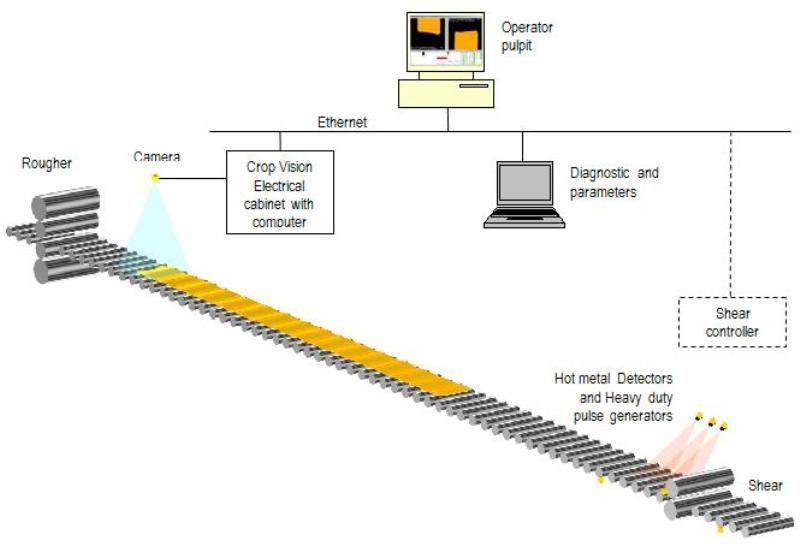 A high resolution area CCD camera is mounted in a water cooled rugged enclosure at the exit of the last rougher. This camera feeds video frames to the Vision System computer captured in a fraction (1/1000) of one second to eliminate any impact of blurring due to speed of the bar. The computer searches each frame for a significant transition in video light levels : a dark to bright transition indicates the presence of the head end of the bar; a bright to dark transition indicates the presence of a tail end.

High speed pattern recognition software then intelligently analyses the image and precisely determines the complete profile of the head and tail end.

An optimal cut line is determined in accordance with the unique shape of the head and strategies that are applicable for the particular gauge, grade and customer specifications. The captured image of the bar together with the cut line, is displayed for the operator. The operator has time and controls to adjust the cut-line if there are special circumstances which require manual over-ride.

Similarly, the image of the tail of the bar is captured, analyzed, and an optimal cut point is determined.

The CropVision CV3000 supports Ethernet TCP/IP and RS232/RS422 communications to the host computer and to the shear controller. A Profibus-DP option is also available. 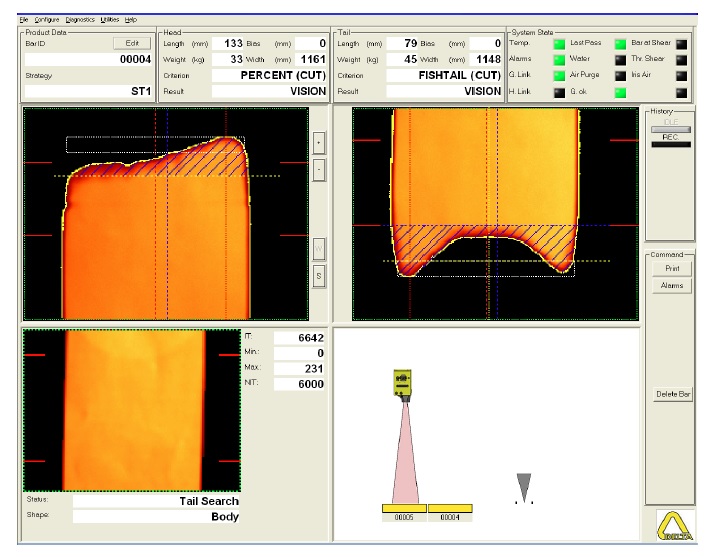 The screen shows the head of a bar, with the cut line and the following information: cut or skip decision, cut length, bar id, bar width at the base of the head, cut weight, and offset. The tail is shown in a similar manner on the screen. A bar end (head or tail) is shown from the time it passes under the camera until the time it is cut. If there are two heads between the camera and the shear the leading head will be displayed. Tails are similar.

The lower part of the display tracks the progression of bars as they move from the camera to the shear. The status of all alarms is shown to the top right of the panel.

The system allows configuration of the different parameters through menus which are password protected.

The edge detection algorithm enables the system to find a starting point on the leading edge of the bar. The system looks for the maximum light level gradient along a vertical line within the captured image. This point is the end of the bar. From the starting point determined above, the system follows the contour of the bar by tracing the gradient profile through the image.

The percent-Cut criterion states a width percentage tolerance that the end of the bar must fulfill after it has been cut.  For example, if the base width is calculated to be 2000 mm, and the Percent-Cut criterion is 90%, the cut line will be located at the point where the bar is 1800 mm wide, if this constraint is binding. 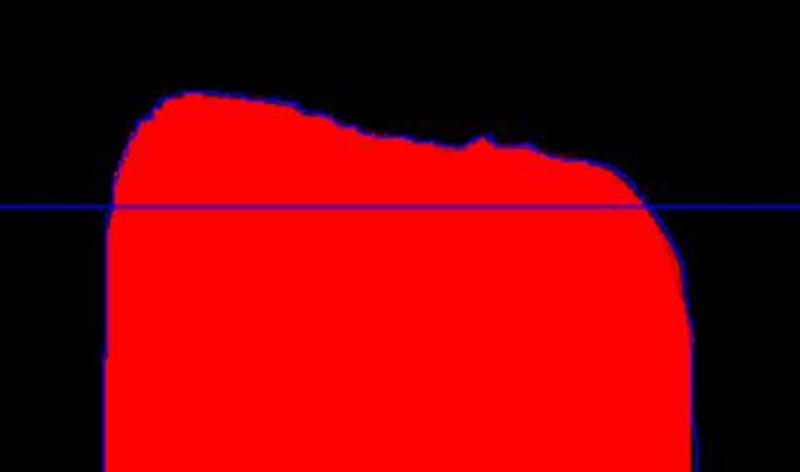 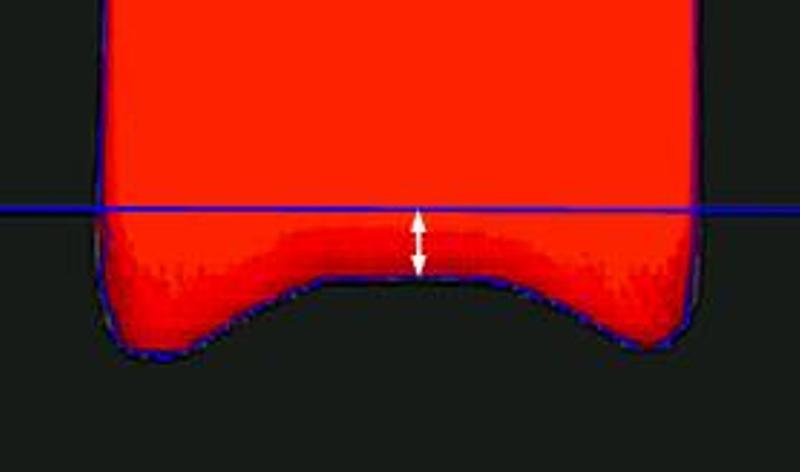 Once the image has been captured and analyzed, the CropVision CV3000 determines the optimal cut point. Two factors are considered when determining the optimum length of the crop: the shape of the end of the transfer bar, and the 'cut strategy'.

A 'cut strategy' is a set of rules that are applied to the shape of the bar to determine the optimal cut point. The appropriate strategy for any given transfer bar end may depend upon the steel chemistry, the final gauge, the end customer or other factors. For example, coils to be sold as hot rolled bands may require a different cropping strategy from those to be sold as cold rolled sheet.

The DELTA Crop Shear Optimization System is the most flexible system available, having the capability to store up to twelve (12) independent cut strategies. The appropriate strategy for each bar is downloaded from the host computer as part of the set up message.

The shear operator can easily over-ride the cut line determined by the CropVision CV3000 and adjust the cut line position manually with 2 scroll bars.